1) MS Dhoni only cricketer and Indian in Forbes list of highest-paid athletes:

--> Cricketer Mahendra Singh Dhoni is among Forbes magazine's 100 highest-paid athletes in the world.
--> He is also the only Indian sportsman on the list that has been topped again by American boxer Floyd Mayweather and includes golfer Tiger Woods, tennis star Roger Federer and Portuguese soccer player Cristiano Ronaldo.
--> Dhoni has been ranked 23rd on the Forbes list of The World's Highest-Paid Athletes 2015. 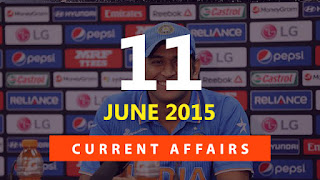 --> Legendary English actor, singer and writer Sir Christopher Lee passed away in London, United Kingdom.
--> The veteran actor was famously known as the master of horror for his famous villainy acting roles in numerous movies such as Dracula, The Wicker Man, James Bond, Lord of the Rings trilogy etc.

--> Google has launched a new lite mode of Google search engine for India and Brazil.
--> The feature will be rolled out in India in two weeks and expected to open pages much faster, yet consume 80% less data than the traditional search engine.
--> Before launching, Google tested the feature in Indonesia, where the network speed is similar to India.

--> The 44th edition of COPA America, the prestigious football tournament for South American countries, started from 11 June 2015.
--> Chile is hosting the tournament this year.
--> The tournament was originally planned to be hosted by Brazil but it opted out from hosting the tournament due to tight schedule for major tournaments like 2013 FIFA Confederations Cup, 2014 FIFA World Cup and the 2016 Summer Olympics.
--> Twelve countries are participating in COPA America 2015 – Argentina, Bolivia, Brazil, Chile, Columbia, Ecuador, Jamaica, Mexico, Paraguay, Peru, Uruguay and Venezuela.

5) England’s cricketer Matt Prior retired from all forms of cricket:

--> Prof Sanghmitra Bandyopadhayay was on 10 June 2015 appointed as the Director of Indian Statistical Institute (ISI) by the Union Ministry of Statistics and Programme Implementation (MOSPI).
--> She is the first woman to lead the institute and replaced Dr Bimal K Roy who was removed on charges of indiscipline.
Posted by Admin