1) Zimbabwe dollars phased out:
--> Reserve Bank of Zimbabwe said government lead by President Robert Mugabe has decided to discard its virtually worthless national currency.
--> Foreign currencies like the US dollar and South African rand have been used for most transactions since 2009.
--> Hyperflation is what happened in Zimbabwe.
--> Hyperflation is a situation of extremely rapid or out of control inflation. It occurs when there is a large increase in the money supply not supported by gross domestic product (GDP) growth. 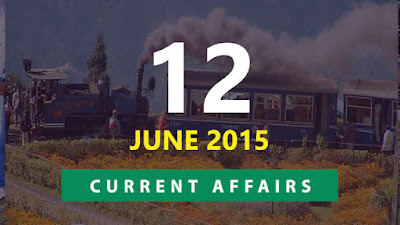 2) Andhra Pradesh launched ‘Mee Bhoomi’ digital depository of land records:
--> The Andhra Pradesh government has launched `Mee Bhoomi', a digital depository of land records.
--> The portal, http://meebhoomi.ap.gov.in/, makes all land details along with Adangal/Pahani and 1-B details, available to the people.
3) Suvidha trains with dynamic fare to start in July:
--> Railway Ministry said on 12 June 2015 that Suvidha trains with dynamic fares will be introduced in July to address the rush during peak travel seasons.
--> These trains will have dynamic fare system and authorities said there will not be any downward movement of the fare.
--> Depending upon the demand, these trains may be run during "peak seasons like winter rush, summer rush, Dussehra rush, Holi rush and on other occasions".
--> This category will have three variants viz. Rajdhani, Duronto and the ones like Mail and Express trains.
4) Toy train service resumed in Darjeeling after five years:
--> After a gap of nearly five years, the toy train service has resumed in West Bengal's Darjeeling.
--> The toy train 'Queen of Hills' shuttled on June 12, 2015 between Darjeeling and New Jalpaiguri stations.
--> The Darjeeling Himalayan Railway, a UNESCO World Heritage Site, consists of 88.48 km of narrow gauge track that connects New Jalpaiguri with Darjeeling, passing through Ghum at an altitude of 2258 meters.
--> The toy train service was suspended on September 2010, after a landslide destroyed about 600 meters of road and tracks running parallel to it at the Tindharia town of Darjeeling.
5) Iconic Rock Garden creator Nek Chand passed away:
--> Rock Garden creator and Padma awardee Nek Chand Saini, 90, died on 12 June 2015.
-->  Nek Chand Saini was known all over the world for his unique creation in Chandigarh, the Rock Garden and was awarded the Padma Shri by Government of India in 1984.
--> The Garden was created with used waste and useless articles like old switches, tyres, bicycle parts, bangles, mosaic, etc. from demolition sites around the city.
6) Wes Hall inducted into ICC Hall of Fame:
--> Former West Indies fast bowler Wes Hall was inducted into the ICC Cricket Hall of Fame during the lunch break on the opening day of the Sabina Park Test between West Indies and Australia on 12 June 2015.
--> He became the fourth cricketer to receive the honour this year after Betty Wilson, Anil Kumble and Martin Crowe.
--> Hall, 77, received his commemorative cap from fellow Hall of Famer Courtney Walsh, and is now the 18th cricketer from the Caribbean to be bestowed with the award.
7) Yahoo to host Mobile Developer Meet in India:
--> Yahoo announced on 12 June 2015 that it will host its mobile developer meet in New Delhi on June 24 and in Bengaluru on June 26.
--> The Yahoo mobile developer suite can help developers build their app businesses, monetise and create better experiences for their users.
Posted by Admin