Ability SSC CHSL Paper Syllabus same as in but with slightly higher level in comparison of SSC CHSL PA SA Recruitment 2015 to always comes from previous year model paper pattern on Quant’s that from Arithmetical and Numerical Abilities, there will be questions on data interpretation & Analysis. And at last you will get date of joining and appointment letter based on position in the SSC CHSL Merit List 2015.

Geometry: Familiarity with elementary geometric figures and facts:
Triangle and its various kinds of centers, Congruence and similarity of triangles, Circle And its chords, tangents, angles subtended by chords of a circle, common tangents to Two or more circles.

Email ThisBlogThis!Share to TwitterShare to FacebookShare to Pinterest
Labels: syllabus 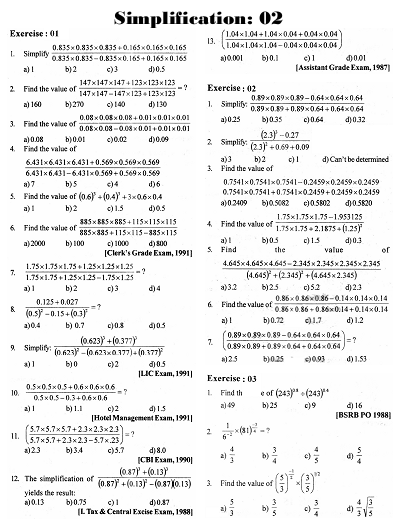 1) Who gave the title of ‘Mahamana’ to Madan Mohan Malaviya?
(A) Bal Gangadhar Tilak
(B) Dadabhai Nauroji
(C) Gopal Krishna Gokhale
(D) Mahatma Gandhi
2) The vacancy of the office of the President must be filled within?
(A) 3 months
(B) 6 months
(C) 12 months
(D) 1 month
3) Who described the Government of India Act, 1935 as a new charter of bondage?
(A) B. R. Ambedkar
(B) Mahatma Gandhi
(C) Rajendra Prasad
(D) Pt. Jawaharlal Nehru
4) Who was the Viceroy at the time of Quit India Movement?
(A) Lord Irwin
(B) Lord Mountbatten
(C) Lord Wavell
(D) Lord Linlithgow
5) Who wrote the book “Why Socialism”?
(A) Jayaprakash Narayan
(B) Mahatma Gandhi
(C) Acharya Narendra Dev
(D) M .N. Roy
6) Acceptable “Noise Pollution Level” in India ranges between?
(A) 10 - 15 dec
(B) 16 - 35 dec
(C) 40 - 45 dec
(D) 70 - 100 dec
7) Blood is a?
(A) reproductive tissue
(B) connective tissue
(C) epithelial tissue
(D) muscular tissue
8) Transboundary pollution (or) Acid rain is caused by?
(A) Nitrogen oxide and sulphur dioxide
(B) Carbon monoxide
(C) Carbon dioxide
(D) Hydrocarbon
9) In which part of the Indian Constitution, the Fundamental Duties are enshrined?
(A) IV
(B) IV-A
(C) IV-B
(D) V
10) From which of the following banks did Madan Mohan Malaviya take loans for financing “The Hindustan Times”?
(A) State Bank of India
(B) Punjab National Bank
(C) Bank of Maharashtra
(D) Bank of Baroda
Posted by Admin No comments: Links to this post

1) History was made on 14 July 2015 as the NASA spacecraft 'New Horizons' hurtles past which planet?
(A) Saturn
(B) Jupiter
(C) Pluto
(D) Mars
2) World’s largest religious congregation Sinhastha Kumbh Mela has recently begun at Trimbakeshwar, Nashik district of which state?
(A) Maharashtra
(B) Uttar Pradesh
(C) Bihar
(D) Punjab
3) India and which country on 15 July 2015 signed a Memorandum of Understanding (MoU) in New Delhi, for cooperation in the field of election management and administration?
(A) Russia
(B) Georgia
(C) Tajikistan
(D) Bhutan
4) Union Ministry of Urban Development on 15 July 2015 launched the National Heritage Development and Augmentation Yojana (HRIDAY) for ___ cities in the country?
(A) 49
(B) 23
(C) 12
(D) 9
5) Artist Sayed Haider Raza was recently conferred with Commandeur de la Lgion dHonneur (the Legion of Honour), the highest Civilian Award of which country?
(A) Japan
(B) Canada
(C) Italy
(D) France
6) BCCI has recently decided to scrap which among the following T20 league with immediate effect?
(A) IPL
(B) Big Bash
(C) T20 Runners Cup
(D) Champions League T 20
7) India recently won the three-match One Day International (ODI) Series against Zimbabwe 3-0. Who captained India during this series?
(A) Ajinkya Rahane
(B) Virat Kohli
(C) Rohit Sharma
(D) Suresh Raina
8) Which country has recently established the world’s largest cancer registry system?
(A) India
(B) USA
(C) Australia
(D) China
9) Who was recently appointed as chairman of Narmada Valley Development Authority (NVDA)?
(A) Rakesh Sahni
(B) Suresh Kalmadi
(C) Kiran Takur
(D) Pradeep Kumar
10) Reserve Bank of India (RBI) has recently set up a committee to work out a five-year action plan for financial inclusion. The 14-member panel will be headed by?
(A) H.R.Khan
(B) Deepak Mohanty
(C) Vijaya Bhaskar
(D) U. S. Paliwal

1) Missile man of India APJ Abdul Kalam passed away:
--> Former President APJ Abdul Kalam passed away in Shillong on 27 July 2015 following a massive heart attack.
--> Kalam collapsed at Indian Institute of Management (IIM)-Shillong at about 6.52 pm while he was delivering a lecture.
--> Government has decided to declare national mourning for seven days as a mark of respect for late former President Abdul Kalam.
--> Kalam, who served as the 11th President of India from 2002 to 2007, was born in Rameswaram, Tamil Nadu on 15 October 1931, and studied physics and aerospace engineering.
--> His role in development of ballistic missile and launch vehicle technology earned him the moniker - 'Missile Man'.
--> Kalam played a pivotal role in the nuclear tests that India conducted in 1998 in Rajasthan's Pokharan.
--> Kalam was conferred with Bharat Ratna, India's highest civilian honour, in 1997 for his immense and valuable contribution to country's scientific research and modernisation of defence technology. 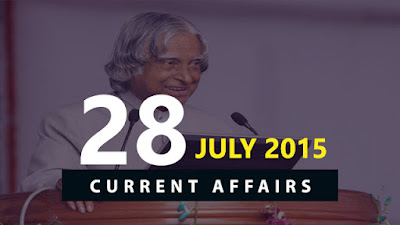 2) IT Secretary R S Sharma appointed as TRAI chairman:
--> Information Technology Secretary Ram Sevak Sharma on 27 July 2015 was appointed chairman of the Telecom Regulatory Authority of India (Trai).
--> Sharma was set to retire in September as secretary of department of electronics and information technology.
--> A 1978-batch IAS officer of the Jharkhand cadre, he was a probable choice because of his familiarity with the telecom and IT sector.
--> He will take place of Rahul Khullar who had retired in May 2015.
3) Andhra Pradesh Government to rename Rajahmundry as Rajamahendravaram:
--> Rajahmundry shall henceforth be known as Rajamahendravaram, announced Chief Minister N Chandrababu Naidu at the concluding meeting of the Godavari maha pushkaram.--> The new name is derived from a Chalukya dynasty ruler of the 11th century who ruled over the city.
--> The city, located on the banks of Godavari, is the headquarters of Rajahmundry urban and Rural mandals.
4) Chris Froome won the Tour de France 2015:
--> Chris Froome won the Tour de France 2015 on 26 July 2015 to become the first Briton to won this most prestigious cycling championship twice.
--> Chris Froome, who had won the championship in 2013 beat Colombia’s Nairo Quintana to create cycling history for Britain.
-->  He became the first Briton to win the Tour de France twice as he safely finished the arduous championship at its finishing line in Paris.
5) Mexico won record 7th CONCACAF Gold Cup:
--> Mexico spoiled Jamaica's first trip to the CONCACAF Gold Cup final with a dominant 3-1 triumph that gave them a record seventh Cup title.
--> Jamaica had become the first Caribbean team to reach the final, but Mexico stole the storyline at Philadelphia's Lincoln Financial Field by winning their third Cup championship from the last four played.
6) Swati Maliwal took charge as Chairperson of Delhi Commission for Women:
--> Swati Maliwal on 28 July 2015 took charge as the Chairperson of Delhi Commisson for Women (DCW), along with three other members.
--> Her appointment was approved by Lt Governor Najeeb Jung.
7) Ashish Bahuguna appointed as the New Chief of Food Regulator FSSAI:
--> Ashish Bahuguna, former agriculture secretary, has been appointed as the chairman of the Food Safety and Standards Authority of India or FSSAI.
--> The tenure of the chairman is for three years.
--> Until now, Health Secretary Bhanu Pratap Sharma was temporarily in-charge of the post.
--> Mr Bahuguna, a 1978-batch Indian Administrative Service officer of Rajasthan cadre, retired in February this year.
Posted by Admin No comments: Links to this post

1) Sebastian Vettel won Hungarian Grand Prix 2015:
--> Ferrari’s driver Sebastian Vettel of Germany won the 2015 Hungarian Grand Prix of Formula One (F1).
--> Sebastian Vettel is a four-time world champion and this was his 41st career win and first since the Malaysian GP in the second race of this season.
--> Vettel dedicated his win to Jules Bianchi, the French driver who died last week at the age of 25 from injuries sustained in a head-on crash at the Japanese GP last October.
--> Daniil Kvyat finished second and Daniel Ricciardo finished third. 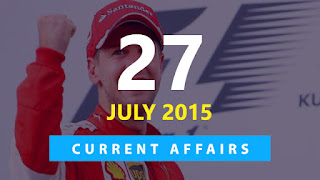 2) IDFC gets banking licence from RBI:
--> IDFC Ltd said on 24 July 2015 the Reserve Bank of India had granted a banking licence to the financial company, making it the second lender to enter the banking sector after more than a decade.
--> The Indian microfinance company Bandhan Financial Services and Mumbai-based IDFC were the only two companies to be granted preliminary bank permits last year.
--> Bandhan said in June it would launch banking operations in August.
3) World's largest flower blooms in Tokyo for first time in 5 years:
--> A Titan Arum, believed to be the world's largest flower, bloomed this week in Tokyo's Jindai Botanical Garden for the first time in five years.
--> The flower Titan arum measuring 2-meter (6.5 feet) in height rarely flowers and is notoriously difficult to propagate.
--> It is commonly called the corpse flower because it smells like rotting meat that helps attract pollinators such as beetles and flies.
4) World's 1st malaria vaccine gets regulatory nod:
--> The world's first malaria vaccine cleared one of the final hurdles as it received a positive scientific opinion from European regulators and now awaits approval from the WHO before it could be administered within the next few years across Africa.
--> The vaccine, named Mosquirix, was on 24 July 2015 given the green light by London-based European Medicines Agency after more than 30 years of research, detailed in 230,000 pages of data.
--> The vaccine will be examined by the WHO which will give its recommendation in November this year.
5) Dhoni named as 9th most marketable sportsman:
--> According to figures released by the London School of Marketing, Indian skipper Mahendra Singh Dhoni has been named as the ninth most marketable sportsman in the world.
--> He sits ahead of the likes of Cristiano Ronaldo, Lionel Messi, Maria Sharapova, Kobe Bryant and Usain Bolt among others.
--> The list is headed by tennis star Roger Federer who lost in the Wimbledon this year to Novak Djokovic.
6) Anand Krishnamurthy appointed CEO and MD of CSB bank:
--> Anand Krishnamurthy is now the new MD and CEO of Catholic Syrian Bank (CSB) replacing Rakesh Bhatia who had quit due to personal reason.
--> This appointment was done by the board of directors of CSB among the three named sent to RBI.
7) Earth-like planet found by NASA's Kepler telescope:
--> Scientists using NASA's powerful Kepler telescope have found a planet beyond the solar system that is a close match to Earth.
--> The planet, which is about 60 percent bigger than Earth, is located about 1,400 light years away in the constellation Cygnus.
--> While similarly sized planets have been found before, the latest one, known as Kepler-452b, is circling a star that is very similar but older than the sun at a distance about the same as Earth's orbit.
8) 16th Anniversary of Kargil Vijay Diwas observed:
--> The 16th anniversary of Kargil Vijay Diwas observed across the nation on 26 July 2015.
--> On this day in 1999 Indian Army defeated Pakistan Army in the Kargil War.
--> The observance of the day in 2015 was marked with paying tribute to Kargil War heroes by laying a wreath at Amar Jawan Jyoti in Delhi by Defence Minister Manohar Parrikar and three service chiefs - Army chief General Dalbir Singh Suhag, Air Chief Marshal Arup Raha and Navy chief Admiral RK Dhowan.
9) PM Modi launched ‘Deen Dayal Upadhyaya Gram Jyoti Yojana’:
--> Prime Minister Narendra Modi on 25 July 2015 launched the ‘Deen Dayal Upadhyaya Gram Jyoti Yojana’ for power sector reforms in rural areas with a view to ensuring round the clock electricity supply to farmers and rural households.
--> Speaking at the launch of the scheme at Patna, Modi said that development is the panacea for all problems related to poverty and unemployment.
--> The new power scheme focuses on feeder separation (rural households and agricultural) and strengthening of sub-transmission and distribution infrastructure, including metering at all levels in rural areas.
--> The earlier scheme for rural electrification, Rajiv Gandhi Grameen Vidyutikaran Yojana (RGGVY), which was launched by previous UPA government, has been subsumed in the new scheme as its rural electrification component.
10) S. Sreesanth discharged in Indian Premier League 2013 Spot-Fixing Case:
--> S. Sreesanth and 41 others have been discharged by a Patiala House Court in New Delhi in the Indian Premier League 2013 spot-fixing scandal.
--> The entire case has been dropped due to lack of evidence.
Posted by Admin No comments: Links to this post