India Post Postman Examination Result which is held on 25.10.2015 in Amaravathi Division 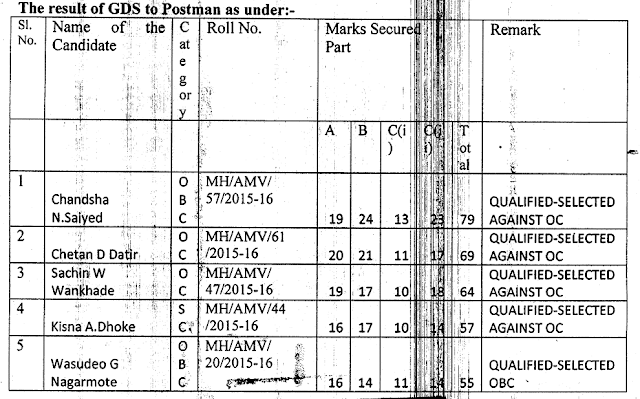 Direct Recruitment Examination for Postal / Sorting Assistant held on 04.05.2014 in Jharkand Postal Circle is hereby cancelled due to unavoidable reason's. 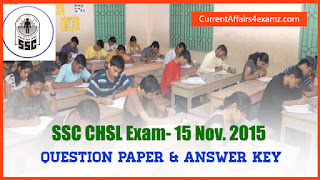 Friends..Here are the solved GK Questions of SSC CHSL Exam held on 15 November 2015 (Morning Shift)- Part 2. Answers are highlighted.
1) Who was Akbar's guardian?

(A) Bairam Khan (B) Amir Khusru (C) Abul Fazal (D) Tansen
2) Life originated by chemosynthesis was proved in the laboratory by:
(A) Aristotle (B) Sanger (C) Pasteur (D) Miller
3)  Which amendment of the constitution lowered the voting age from 21 years to 18 years?
(A) 63rd Amendment (B) 64th Amendment (C) 60th Amendment (D) 61st Amendment
4) J. B. Say's Law of Market was not accepted by:
(A) David Ricardo (B) Adam Smith (C) Marshall (D) Malthus
5) Richter Scale is used for measuring:
(A) Humidity of air (B) Velocity of wind (C) Density of liquid (D) Intensity of earthquake

6) The capital of Rawanda is:
(A) Copenhagen (B) Libreville (C) Bogota (D) Kigali
7) What is the name of Research Station established by Indian Govt. forconducting research at Antarctic?
(A) Dakshin Gangotri (B) Yamunotri (C) Uttari Gangotri (D) None of the above
8) Which bank is limited to the needs of agriculture and rural finance?
(A) NABARD (B) RBI (C) SBI (D) IFC
9) Damping off of seedlings is caused by:
(A) Pythium debaryanum (B) Peronospola parasitica (C) Albugo candida (D) Phytophthora infestans
10) Soap helps in better cleaning of clothes because:
(A) It absorbs the dirt (B) Soap acts like catalyst (C) It reduces the surface tension of solution (D) It gives strength to solution
11) Which of the following is commonly used in preparing custard powder?
(A) rice (B) raagi (C) wheat (D) maize
12) The National Emblem of Italy is:
(A) Lily (B) Eagle (C) White Eagle (D) White Lily
13) The slogan 'Garibi Hatao' was included in the:
(A) Fourth plan (B) Second plan (C) First plan (D) Fifth plan
14) Excretion in Hemichordates takes place by:
(A) Metanephron (B) Glomerulus (C) Pronephron (D) Mesonephron
15) Which of the following monuments is the oldest?
(A) Taj Mahal (B) Qutab Minar (C) Khajuraho (D) Ajanta Caves
16) The Name of the Laccadive, Minicoy and Amindivi Islands was changed, to Lakshadweep by an act of parliament in:
(A) 1972 (B) 1973 (C) 1970 (D) 1971
17) The phenomenon which causes mirage is:
(A) Total internal reflection (B) Interference (C) Diffraction (D) Polarisation
18) To conserve coral reefs the Govt. of India declared one of the following as Marine Park:
(A) Gulf of Mannar (B) Andaman Islands (C) Gulf of Kutch (D) Lakshadweep Islands
19) The use of heat treatment of ore that includes smelting and roasting is termed as :
(A) Cryometallurgy (B) Electrometallurgy (C) Hydrometallurgy (D) Pyrometallurgy
20) Who invented the battery?
(A) Maxwell (B) Roentgen (C) Volta (D) Faraday
Posted by Admin No comments: Links to this post 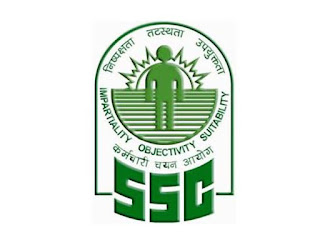 Staff Selection Commission (SSC) has released the Schedules of the examinations which are being conducted by SSC in the year 2016. According to this calendar, the SSC CGL 2016 exam will be held in May 2015 (notification will be out in the second week of February 2016), and SSC CHSL 2016 will be held in the months of September and October 2016 (notification will be out in the first week of July 216).

SSC Exams Schedule / Timetable for 2016 (January 2016 to December 2016)
Departmental Examination
Posted by Admin No comments: Links to this post

Email ThisBlogThis!Share to TwitterShare to FacebookShare to Pinterest
Labels: SSC

Examination for Direct Recruitment of Postman/Mail Guard, 2015 will be held on 15.11.2015 (Sunday). Kindly download admit card from www.dopchennai.in

Hall Ticket can be downloaded from the below website using Registration No and D.O.B

1. Who is the chairman of 7th pay commission ?
answer: Justice Ashok Kumar Mathur

2. Where is the venue of 101st Indian science congress ?
answer: Jammu

6. Who is the new CEO of Microsoft ?
answer: Satya Nadella

7. Who is the new chairman of Microsoft ?
answer: John Thompson

11. Which is the fastest supercomputer in the world ?
answer: Tiahne-2

12. Which is the first Indian state to achieve over 100% sanitation ?
answer: Sikkim

13. Where is The third World Congress on Agro-forestry 2014 held?
Answer: Delhi

15. Which high court banned the transfer of IAS, IPS and IFS officers till the re-composition of the Civil Services Board?
Answer: Allahabad high court

1. where is the headquarters of o.p.c.w organization for the prohibition of chemical weapons ?
Answer: The Hague, Netherlands

2. Bocskai International Tournament is related to which game?
Answer: boxing

3. What is the birth place of Adolf Hitler
Answer: Austria

4. where is the headquarters of WWF International ?
Answer: Gland, Switzerland

5. what is the national game of Spain?
Answer: bull fighting

*10 . What is the full form for ANMI?
Answer : Association of National Exchanges Members of India (ANMI)

*12. Who is the author of devdas?
Answer: Sarat Chandra Chattopadhyay
Posted by Admin No comments: Links to this post

This type of questions often seen in competitive exams, try it...

If you try to solve this question without using equation, it will consume too much time.. so use this equation..

Email ThisBlogThis!Share to TwitterShare to FacebookShare to Pinterest
Labels: Mathematics

These current affairs Questions are useful for UPSC ,bank and PSC exams , SBI clerk, RRB,Postal Assistant and Postman Examination. use this questions for Quick reference .All the questions are updated as on 31/10/15

6. who wrote the book "A Brief History of Seven Killings" ?
Answer: Marlon James

10. Who is the Recently selected prime minister of Nepal ?
Answer: K.P. Sharma Oli

*11. which country was affected by Typhoon "Koppu" ?
Answer : philippines