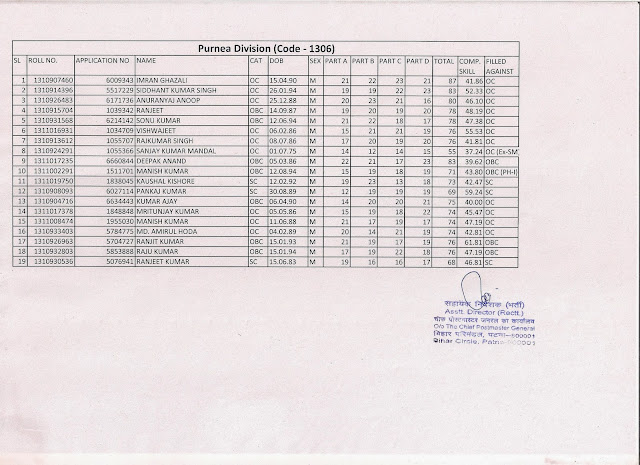 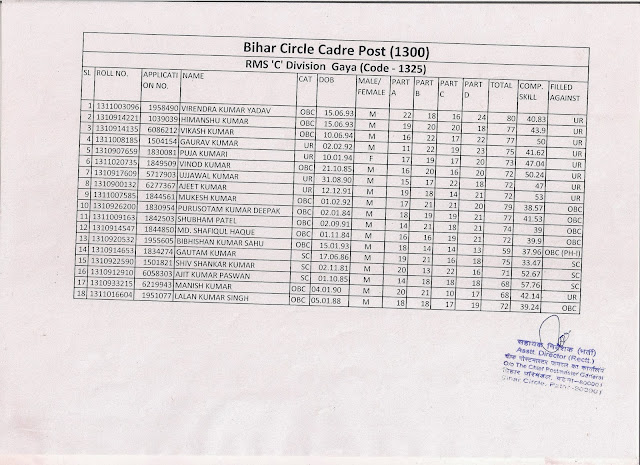 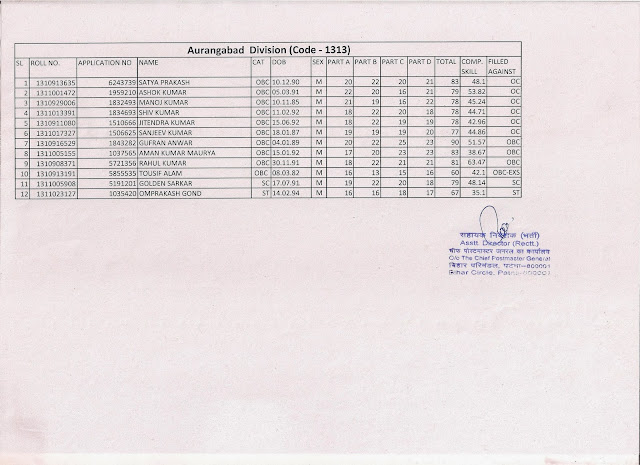 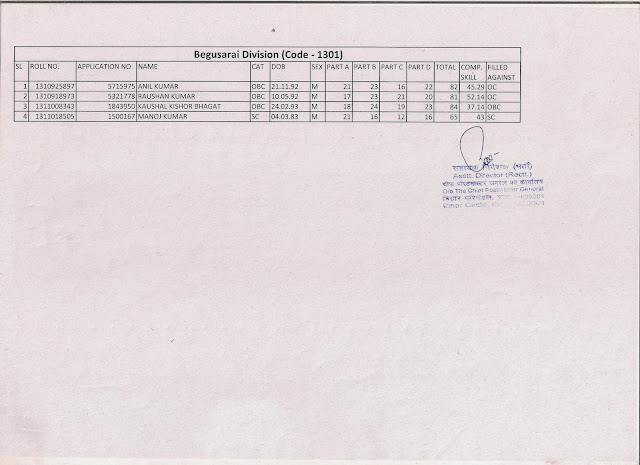 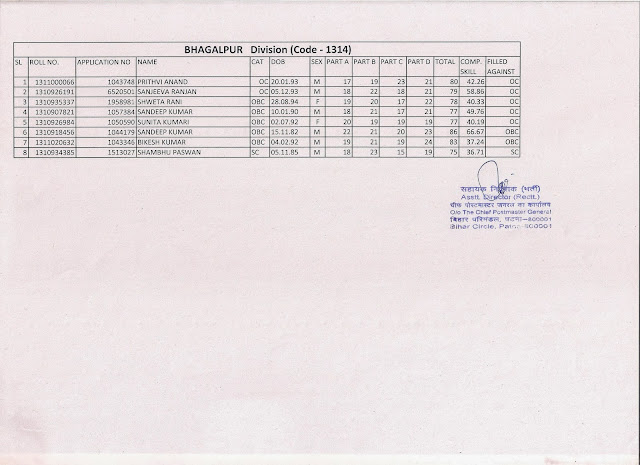 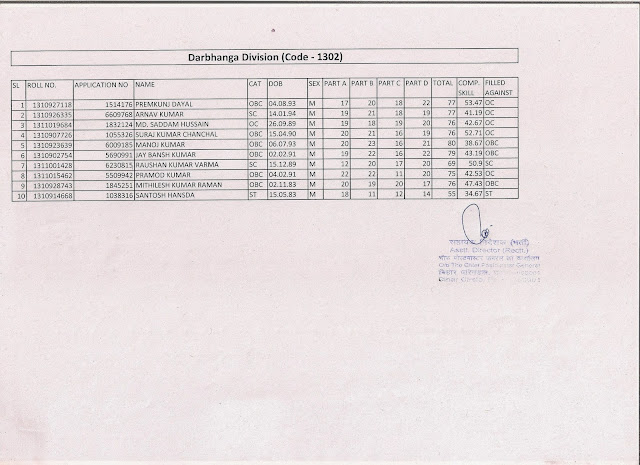 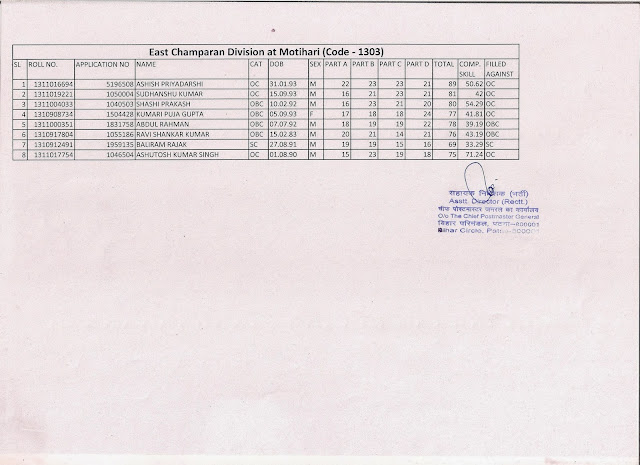 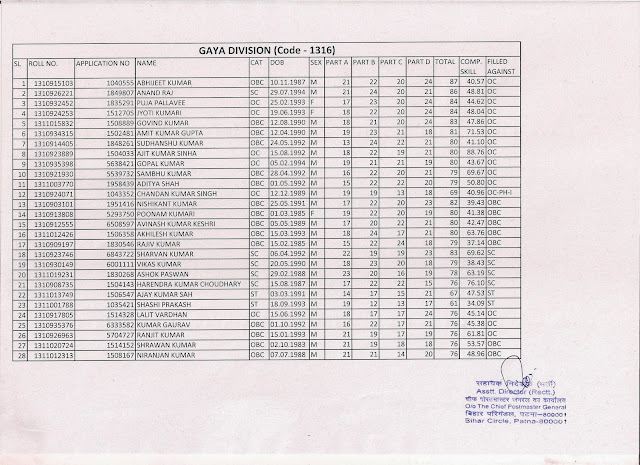 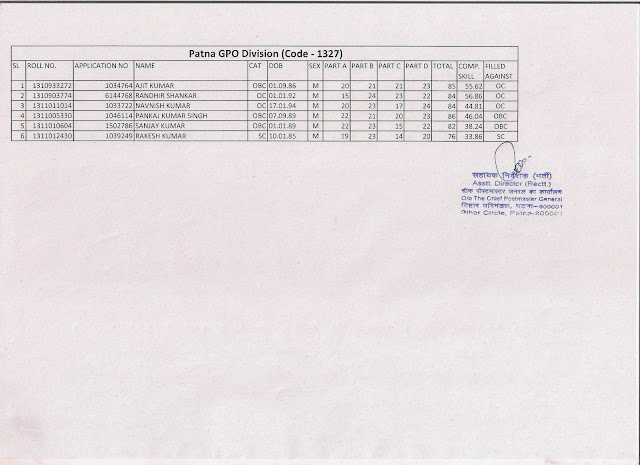 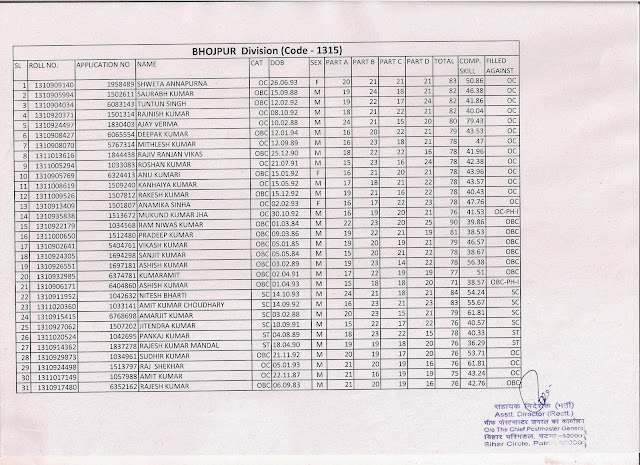 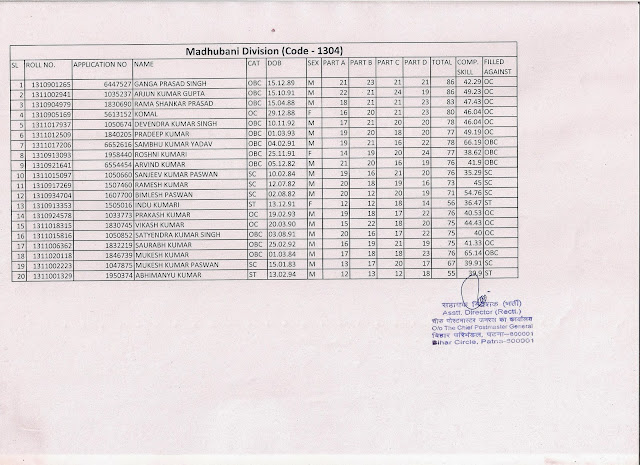 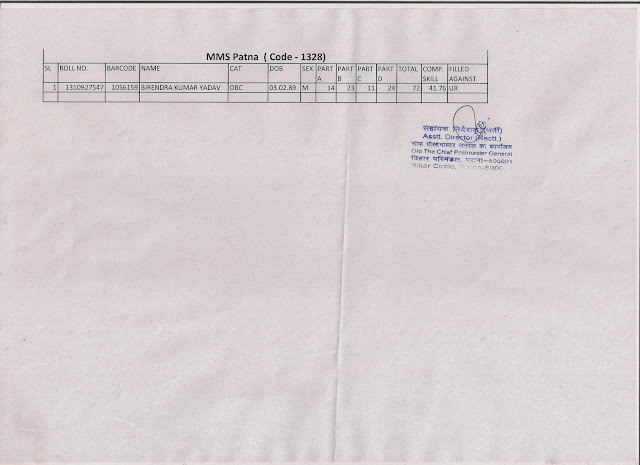 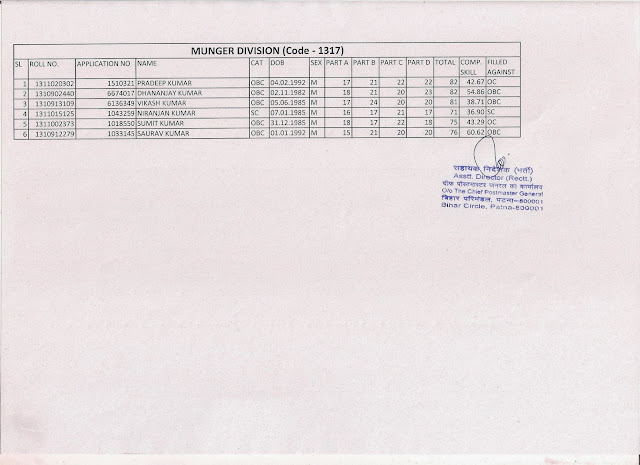 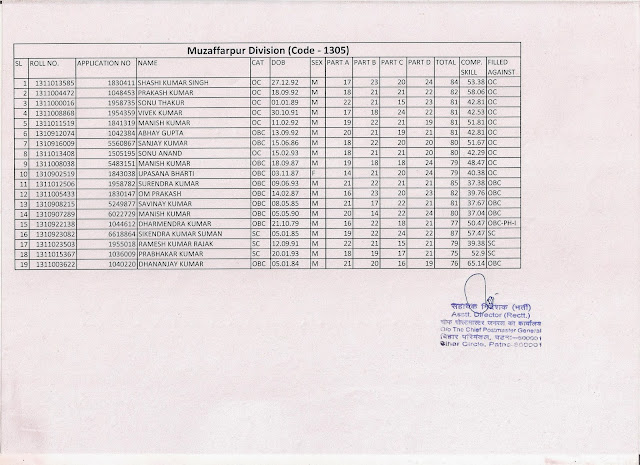 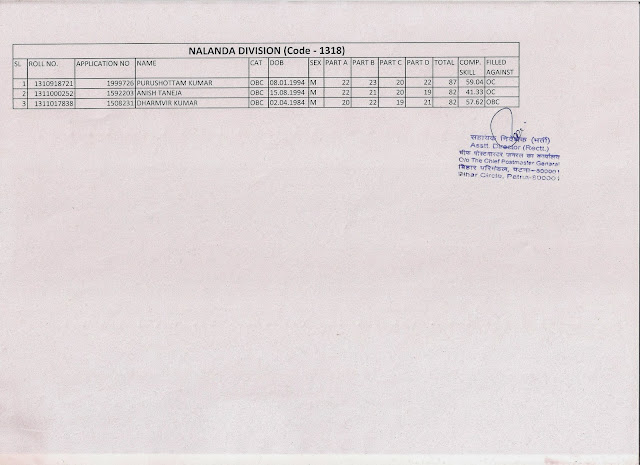 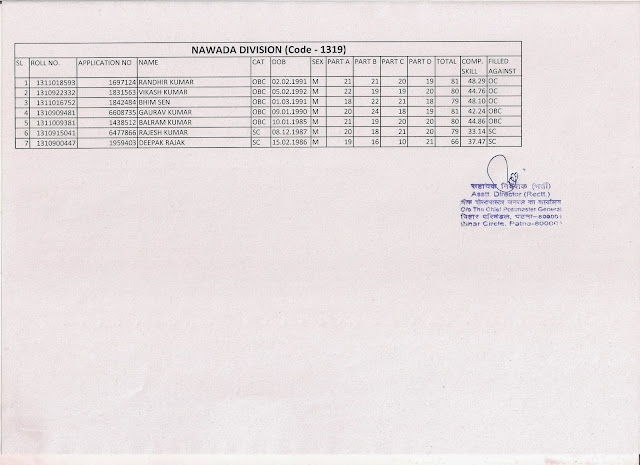 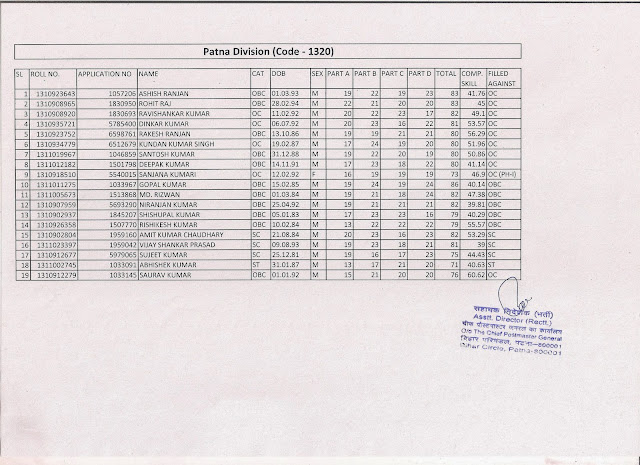 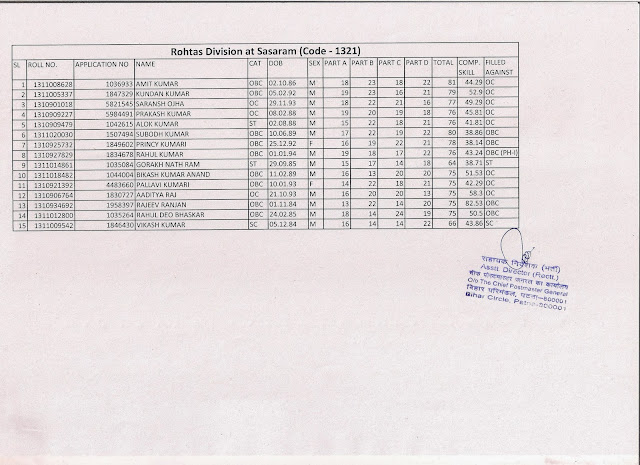 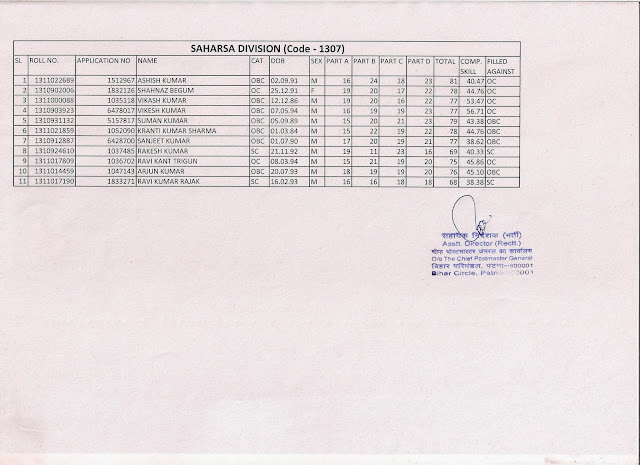 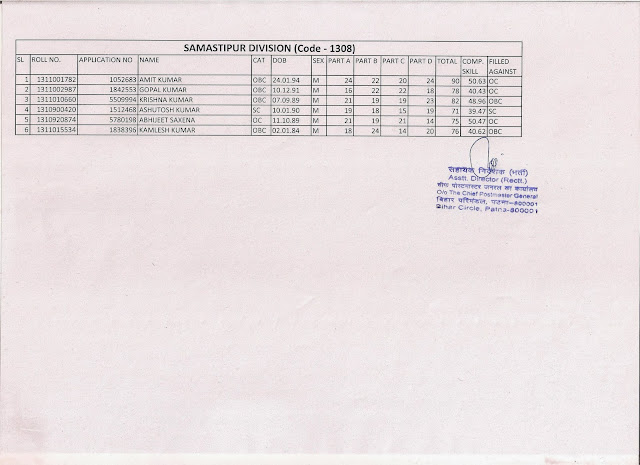 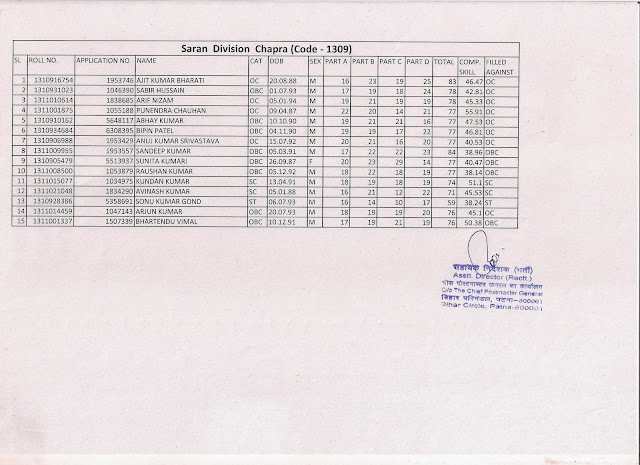 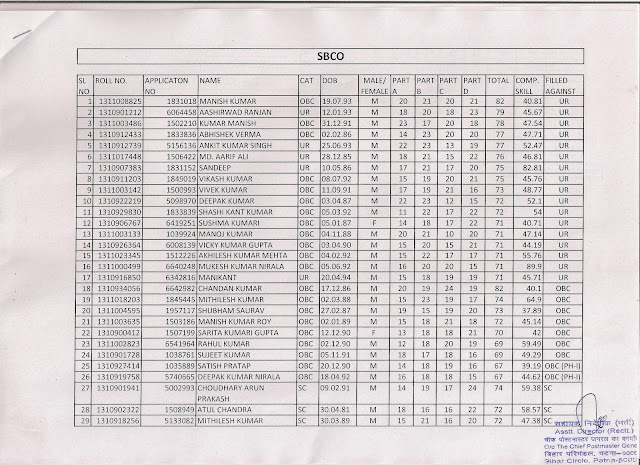 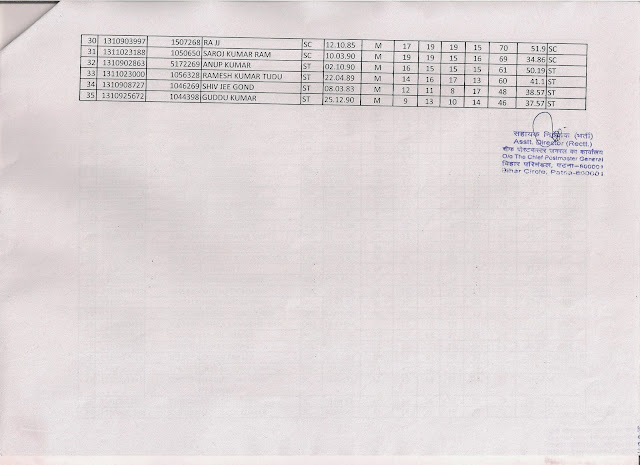 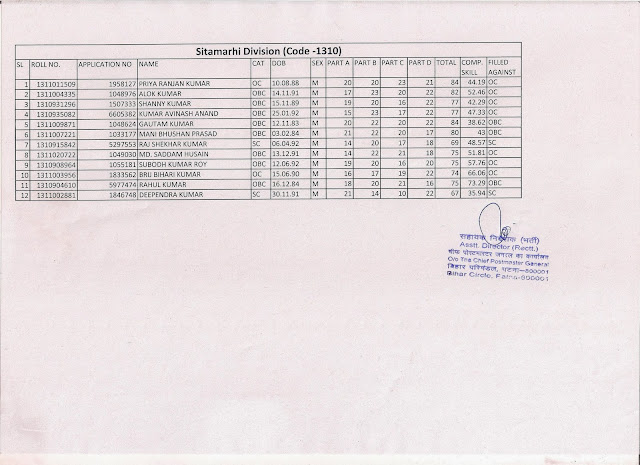 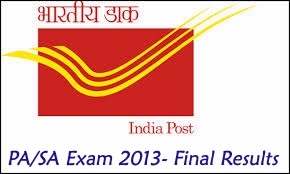 The write up along with the result is as follows:

This is regarding Declaration of Result for Direct Recruitment to the cadre of Postal Assistant in Post Offices and Savings Bank Control Organization in Tamilnadu Postal Circle for vacancies of the year 2011-12.


The list of selected candidate is Display h/w. All Pre and Post appointment activity will be carried out by the concerned Postal Divisional Head. Heads.

Source : http://tamilnadupost.nic.in/
Posted by Admin No comments: Links to this post

In accordance with the provisions contained in PA/SA Recruitment Rules 2011, read with instructions contained in Director General, Department of Posts letter no. 60-9/2009-SPB-I dated 08.05.2012, notification to hold Direct Recruitment to fill up vacancies in PA/SA cadre in Jharkhand Postal Circle was issued on 11.08.2012. Aptitude Test (Paper-I) was held on 05.05.2013 and Computer Test/Typing Test for short listed candidates was held on 24/25.08.2013.

5.         The selection of candidates is based on the following terms and conditions :-

a)         The candidatures of all candidates are provisional and selection is subject to fulfillment of all the conditions prescribed in the notification and also as per Recruitment Rules and instructions.

b)         They have to produce required testimonials in support of age, educational qualification, study of regional language/Hindi in Matriculation level, in case of SC/ST/OBC candidates, community certificate in the prescribed format issued by the Competent Authority, in respect of Ex-Serviceman-discharge certificate issued by the Military Authorities, in respect of PH candidates, medical certificate etc. when called for by the concerned authorities. The candidatures of those selected candidates who do not produce the required documents/certificates in the prescribed formats/who do not fulfill any of the conditions will outrightly be rejected as mentioned in the notification and no correspondence will be entertained in this regard.
2/……

c)         The appointment of selected candidates is provisional and subject to completion of formalities like verification of all records (certificates of educational qualification, community etc) and Medical examination from Competent Medical Officer (CAS) and other verifications prescribed in the rules.

d)         The candidates belonging to PH-I category who have been exempted from appearing in Computer/Typing Test have to produce the prescribed exemption certificate from the Competent Medical Authority in format attached within a prescribed period of 45 days for regularization of their selection against reserved PH vacancies.

e)         The successful selected candidates will be appointed only on completion of pre-appointment formalities and after imparting induction training, against the available vacancy.

f)         If it is later on found that any of these candidates was not eligible to take up the examination under the rules or instructions on the subject or other reason or in case any mistake is later on found with regards to announcement of the results of any candidate for any reason what so ever, his/her name will be deleted from the list of successful candidates, as the case may be. The result is also subject to any change in merit list of selected candidates for any reason in accordance with the existing rules and instructions on the subject.

a)         The candidates have been allotted to Postal or RMS divisions strictly according to the category of post applied for by them. The preferences given for other arm of service has not been taken into account while making allotment.

b)         The allotment of selected candidates is made based on the categorywise vacancies in each unit with marks secured by each in the selection list, the preference of divisions for appointment given and also based on declaration of willingness to accept appointment in any other division furnished, in the OMR applications, to the extent of available vacancies subject to fulfillment of all the conditions prescribed. In case of candidates who had not indicated any preference, it is presumed that he/she has equal preference for all the divisions and such candidates have been allotted to divisions where vacancies existed according to their merit place and subject to fulfillment of all the conditions prescribed.

c)         The inter-se-seniority of the selected/appointed candidates in the unit may be fixed based on the marks secured/merit.

7.         The candidates selected against Postal Assistant (Post Office)/Sorting Assistant may be addressed by the respective Senior Superintendents/Superintendents of Post Offices/RMS Divisions intimating their selection and take further action regarding preappointment formalities.

8.         In respect of the candidates who have been selected to the posts of PA(SBCO), Staff Branch of Circle Office will take further action.
(S.K. Tiwary)
Asstt. Director (P)
O/o the Chief Postmaster General
Jharkhand Circle Ranchi-834002

A copy of this memo is issued for information and necessary action to :-

1.    The Sr./Supdt. of Post Offices, Ranchi Dn/Singhbhum Dn.,Jamshedpur/Dhanbad Dn/
S.P. Dn., Dumka/Palamau Dn., Daltonganj/Hazaribagh Dn/Giridih Dn/The Supdt. of
RMS, RN Dn., Ranchi/DH Dn., Dhanbad. Dossiers of the selected candidates will
be sent separately. They should display the result on notice board.
2.    The Director, PTC, Mysore-570010 with a request to upload the results on India Post
website.
3.    Staff-I Section, Circle Office, Ranchi for further action & display on notice board.
4.    File No. R&E-11/1/2011.
5.    Office copy.